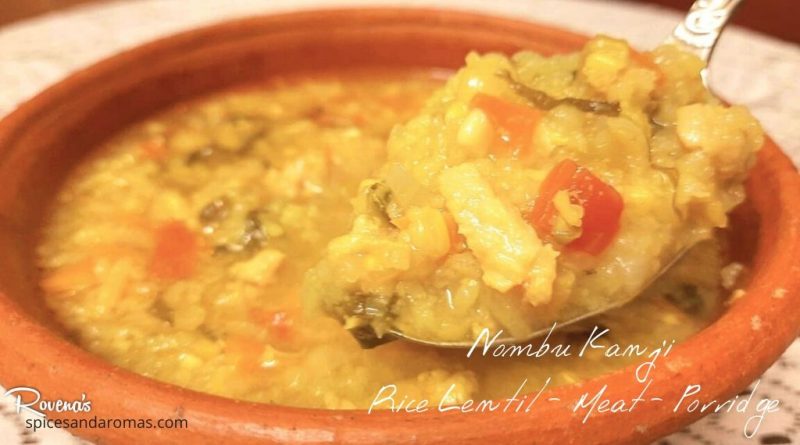 The Ramadan season reminds me more of Nombu Kanji. Nombu means fasting or the person who fasts and Kanji is porridge. It’s a south Indian dish.

During Ramadan, this is prepared in huge quantities in the Mosques and offered to people when they break up from fast. This is also prepared in homes during the Ramadan season.

It is rice and lentil porridge along with minced meat, vegetables and mild spices. It is very nutritious and almost all the ingredients used in preparing biryani is used in this dish.

This dish was introduced to me by my Muslim neighbour, Mrs Gulnaz and almost every day during Ramadaan I used to get this served. It used to be so yummy and Devine.

Not just Ramadan season, you can make it any time and especially it is good for kids.

As I was preparing this dish the whole house was filled with the aroma of this dish and I felt like I was cooking biryani. I used the homegrown mint and coriander which added to the Aroma. Since it is not spicy my kid enjoyed it also all of us enjoyed it for supper.

Nombu Kanji is a Ramadan special breakfast preparation. It is delicious and power packed with nutrients. Main ingredients are rice, lentils, meat and mixed vegetables. I am so happy you’re here on my blog.

Life is a celebration! And good food brings all of us together and makes the event unforgettable!

About me, I am a wife, mom, food blogger and an entrepreneur from a small town, Santhekatte in Udupi – India.

Cooking is my passion and I love to try new in the kitchen. And when people like it, I happily share the recipe with people.

I will be continuously updating recipes. I hope you enjoy my blog and the recipes will become family favourite as well. I only recommend products based on user ratings and reviews. This store contain affiliate links that at no additional cost to you, I may earn a small commission. Read full privacy policy